If you need to contact the Parish of St Wilfrid which incorporates St Michael's Church, please call  0151 422 1722 or email: stwilfridswidnes@gmail.com 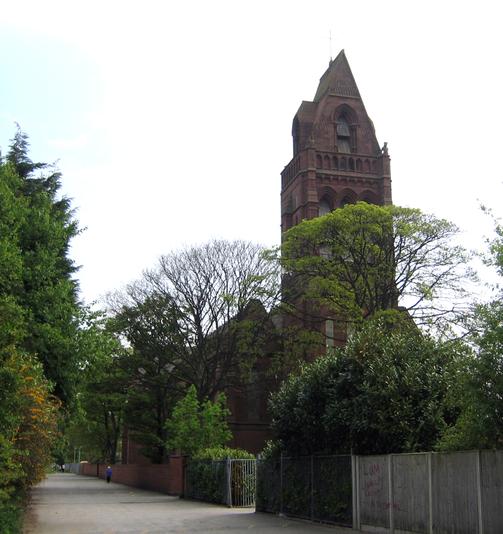 St Michael's Church  is located in St Michael's Road, Ditton, Widnes, Cheshire. It is designated by English Heritage as a Grade II listed building. It is an active Roman Catholic church.

For more information on the Pastoral Area please see www.catholicchurches-widnes.org.uk

The church was founded when Jesuits who were expelled from Germany in 1872 and settled in Ditton. They formed a community and between 1876 and 1879 built the church. It was designed by Henry Clutton. The cost of the church, £16,000 (£1,210,000 as of 2013), was met by Lady Mary Stapleton-Bretherton of Ditton Hall. In 1979 the interior of the church was reordered by Bartlett and Purnell.

The church is built in red ashlar sandstone with a slate roof. Its plan is cruciform, with short transepts and a west tower. It has an eight-bay arcade which takes in the nave and the chancel. The tower is in three stages with a steep saddleback roof. The entrance to the church is through the west door of the tower, above which are three lancet windows. Above these are three-light louvred bell openings and a balustrade. The windows in the gables of the chancel and transepts are rose windows containing stained glass. Elsewhere the windows are lancets. At the east end are two lancets separated by a large shaft.

The ceiling is barrel vaulted, boarded with hardwood, running through the nave and chancel. In the north transept is an organ and confessionals are in the south transept. The chancel has a yellow sandstone wall and a marble floor; the walls of the nave are plastered. The altar and lectern are made from Clipsham stone, and the stained glass comes from Cologne. The organ was built in 1879 by Gray & Davison.